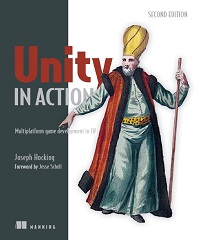 According to the Author, “I’ve been programming games for quite some time, but only started using Unity relatively recently. Unity didn’t exist when I first started developing games; the first version was released in 2005. Right from the start, it had a lot of promise as a game development tool, but it didn’t come into its own until several versions later. In particular, platforms like iOS and Android (collectively referred to as “mobile”) didn’t emerge until later, and those platforms factor heavily into Unity’s growing prominence.

Initially, I viewed Unity as a curiosity, an interesting development tool to keep an eye on but not actually use. During that time, I was programming games for both desktop computers and websites and doing projects for a range of clients. I was using tools like Blitz3D and Flash, which were great to program in but were limiting in a lot of ways. As those tools started to show their age, I kept looking for better ways to develop games.

In learning to develop games using Unity, you’re setting out on an exciting adventure. For me, learning how to develop games meant putting up with a lot of hassle. You, on the other hand, have the advantage of a single coherent resource to learn from: this book!