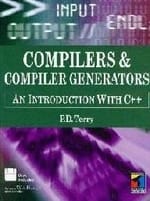 Free download Compilers and Compiler Generators An introduction with C++. in PDF written by Pat Terry.

According to the Author, ” This book has been written to support a practically oriented course in programming language translation for senior undergraduates in Computer Science. More specifically, it is aimed at students who are probably quite competent in the art of imperative programming (for example, in C++, Pascal, or Modula-2), but whose mathematics may be a little weak; students who require only a solid introduction to the subject, so as to provide them with insight into areas of language design and implementation, rather than a deluge of theory which they will probably never use again; students who will enjoy fairly extensive case studies of translators for the sorts of languages with which they are most familiar; students who need to be made aware of compiler writing tools, and to come to appreciate and know how to use them. It will hopefully also appeal to a certain class of hobbyist who wishes to know more about how translators work.
The reader is expected to have a good knowledge of programming in an imperative language and, preferably, a knowledge of data structures. The book is practically oriented, and the reader who cannot read and write code will have difficulty following quite a lot of the discussion. However, it is difficult to imagine that students taking courses in compiler construction will not have that sort of background!
There are several excellent books already extant in this field. What is intended to distinguish this one from the others is that it attempts to mix theory and practice in a disciplined way, introducing the use of attribute grammars and compiler writing tools, at the same time giving a highly practical and pragmatic development of translators of only moderate size, yet large enough to provide considerable challenge in the many exercises that are suggested.

The book starts with a fairly simple overview of the translation process, of the constituent parts of a compiler, and of the concepts of porting and bootstrapping compilers. This is followed by a chapter on machine architecture and machine emulation, as later case studies make extensive use of code generation for emulated machines, a very common strategy in introductory courses. The next chapter introduces the student to the notions of regular expressions, grammars, BNF and EBNF, and the value of being able to specify languages concisely and accurately.
Two chapters follow that discuss simple features of assembler language, accompanied by the development of an assembler/interpreter system which allows not only for very simple assembly, but also for conditional assembly, macro-assembly, error detection, and so on. Complete code for such an assembler is presented in a highly modularized form, but with deliberate scope left for extensions, ranging from the trivial to the extensive.
Three chapters follow on formal syntax theory, parsing, and the manual construction of scanners and parsers. The usual classifications of grammars and restrictions on practical grammars are discussed in some detail. The material on parsing is kept to a fairly simple level, but with a thorough discussion of the necessary conditions for LL(1) parsing. The parsing method treated in most detail is the method of recursive descent, as is found in many Pascal compilers; LR parsing is only briefly discussed.

Free download Compilers and Compiler Generators An introduction with C++. in PDF written by Pat Terry from following download links.