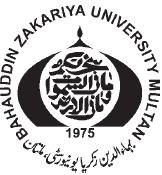 Bahauddin Zakria University Multan is a public sector university of Pakistan, chartered by Government of Punjab and recognized by HEC Pakistan. The university started functioning in 1975 in rented buildings with 8 departments. Presently, it has more than departments. Out of its 610 faculty members, 389 hold doctoral degrees and among its around 27000 students, half are female.

The University is widely known as an institution of strong performance and high ambition because it has continued to make excellence progress toward its goals. It plays a significant role in developing endemic human resources through its highly productive achievement, both in sciences and humanities.

The main objective of the university is to provide facilities of higher education and research to the population of the Southern region of the Punjab, Pakistan. The University fulfills three functions, teaching, affiliation and examination. The university has 135 affiliated colleges, which include old and respective institutions such as the Government Post Graduate College Muzaffargarh, Government Emerson College Multan and the NFC Institute of Engineering & Technology Multan etc.

Institute of Computing, BZU Multan came into existence in April 2009, as an up-graduation of Department of Computer Science which was established in 1995. Today, the institute provides an excellent educational environment that aims at bringing out the best. There are three departments under the Institute of Computing: