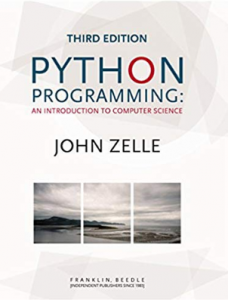 According to the Author, “This book is designed to be used as a primary textbook in a college-level first course in computing . It takes a fairly traditional approach, emphasizing problem solving, design, and programming as the core skills of computer science . However, these ideas are illustrated using a non-traditional language, namely Python . In my teaching experience, I have found that many students have difficulty mastering the basic concepts of computer science and programming . Part of this difficulty can be blamed on the complexity of the languages and tools that are most often used in introductory courses . Consequently, this textbook was written with a single overarching goal: to introduce fundamental computer science concepts as simply as possible without being simplistic . Using Python is central to this goal.

Traditional systems languages such as C++, Ada, and Java evolved to solve problems in large-scale programming, where the primary emphasis is on structure and discipline . They were not designed to make writing small- or medium scale programs easy. The recent rise in popularity of scripting (sometimes called “agile”) languages, such as Python, suggests an alternative approach . Python is very flexible and makes experimentation easy. Solutions to simple problems are simply and elegantly expressed . Python provides a great laboratory for the neophyte programmer.

Python has a number of features that make it a near-perfect choice as a first programming language . The basic structures are simple, clean, and well designed, which allows students to focus on the primary skills of algorithmic thinking and program design without getting bogged down in arcane language details . Concepts learned in Python carry over directly to subsequent study of systems languages such as C++ and Java. But Python is not a “toy language.” It is a real-world production language that is freely available for virtually every programming platform and comes standard with its own easy-to-use integrated programming environment. The best part is that Python makes learning to program fun again.