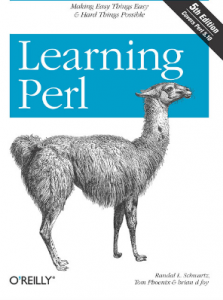 According to the Authors, “Welcome to the fifth edition of Learning Perl, updated for Perl 5.10 and its latest features. This book is good even if you are still using Perl 5.6 (although, it’s been a long time since it was released; have you thought about upgrading?). If you’re looking for the best way to spend your first 30 to 45 hours with the Perl programming language, you’ve found it. In the pages that follow, you’ll find a carefully paced introduction to the language that is the workhorse of the Internet, as well as the language of choice for system administrators, web hackers, and casual programmers around the world.

We can’t give you all of Perl in just a few hours. The books that promise that are probably fibbing a bit. Instead, we’ve carefully selected a useful subset of Perl for you to learn, good for programs from 1 to 128 lines long, which end up being about 90% of the programs in use out there. And when you’re ready to go on, you can get Intermediate Perl, which picks up where this book leaves off. We’ve also included a number of pointers for further education. Each chapter is small enough so you can read it in an hour or two.

Each chapter ends with a series of exercises to help you practice what you’ve just learned, with the answers in Appendix A for your reference. Thus, this book is ideally suited for a classroom “Introduction to Perl” course. We know this directly because the material for this book was lifted almost word-for-word from our flagship “Learning Perl” course, delivered to thousands of students around the world. However, we’ve designed the book for self study as well.

Perl lives as the “toolbox for Unix,” but you don’t have to be a Unix guru—or even a Unix user—to read this book. Unless otherwise noted, everything we’re saying applies equally well to Windows Active Perl from Active State and pretty much every other modern implementation of Perl.

Some of the differences you may notice from prior editions: