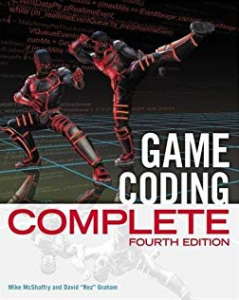 According to the Authors, “The first edition of this book was published in the summer of 2003, just as I was making some big transitions of my own. The first edition gave me a chance to stand back and show programmers what really goes on in the world of game development. Writing the book was a challenge, but the rewards were many. I heard from programmers all around the world who enjoyed the book and found the stories, insight, and programming tips to be helpful. The second edition was almost a complete rewrite. The book went from around 700 pages to 1,110, and it was more popular than the first edition. In 2009, the third edition added AI, multi programming, Lua, and C# with the help of my friends James Clarendon, Jeff Lake, Quoc Tran, and David “Rez” Graham.

The book has never included a CD because the source code will get fixed and tweaked even as this book goes to press and long thereafter. Good suggestions and fixes even come from readers like you. Grab the code from the Game Code website (or the publisher’s), and you’ll be assured of getting the latest source code and information.

The book is organized into four parts:

If you’re a programmer and you’ve had some game programming experience, you’ll be able to follow along nicely. Take a moment to flip through the pages, and you’ll see this book is written for programmers. Non programmers could probably get something from the book, too, but there is more code in this book than non code. The code is written in C++, Lua, and C#. If you don’t know these languages, you’ll probably struggle a little with the code samples, but I’ll bet you can get enough from the comments and the explanations to get your money’s worth.